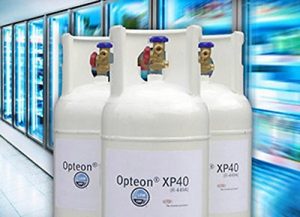 Waitrose has recorded a 6.6 per cent average energy saving, with as much as 9 per cent saved on the MT system, in the first installation of R449A in a UK supermarket.

In 2010, Waitrose published its Carbon Plan, based on an absolute operational emissions target of 15 per cent carbon dioxide equivalent (CO2e) reduction. The indirect and direct emissions from the refrigeration systems in its shops are a very significant contributor, making this area a prime target for improvement.

This, in addition to the F-Gas Regulation bans, which effectively prevent servicing of systems with a charge of over 10.2 kg of R404A from 2020, spurred the retailer to look for a lower-GWP, lower energy replacement. By retrofitting the refrigeration systems in one of its stores in Devon from R404A to Opteon XP40, Waitrose gained up to 9% energy savings, providing the business with a significant opportunity to lower its CO2e emissions and help to achieve the targets set out in its Carbon Plan.

The energy consumption of the refrigeration systems was measured for two weeks before the retrofit and then for three weeks after the retrofit had been completed.

EPTA ColdService was selected to perform the retrofit and the first retrofit took place overnight and the other two packs retrofitted on consecutive nights, without causing any disruption to the trading floor during the store’s opening hours. The Opteon XP40 retrofit guidelines were followed and no components or oil changes were required, making the retrofit very fast and straightforward.

The reduction in energy consumption and the 64%reduction in the GWP of Opteon XP40 compared to R404A offer a significant opportunity for Waitrose to lower its CO2e emissions and help to achieve the target set out in its Carbon Plan.

“Reducing our CO2e emissions is a key target so retrofitting existing R404A systems with Opteon XP40 is an important part of the strategy, not only reducing the direct emissions of the refrigerant but also by reducing the energy consumption of the systems,” says Danny Ryan, Refrigeration Manager, Waitrose.

Opteon XP40 (R449A), Chemours’s flagship low GWP refrigerant, was developed as an ideal replacement for R404A. Opteon XP40 is an HFO-based blend with a GWP of just 1397. The performance of Opteon XP40 is very similar to R404A with a significant reduction in power consumption under a wide range of operating conditions, making it an ideal candidate for retrofitting existing R404A systems.

Major compressor manufacturers have now approved Opteon XP40 for use as a R404A replacement and XP40 can be found in their compressor selection software.