by Cory Alton / Thursday, 21 February 2019 / Published in Electrical
Learn the key factors relating to the installation of swa cables from earthing through support to bending.

Steel-wire armoured (swa) cables commonly serve as distribution circuits and final circuits in electrical installations. This article outlines some of the key factors relating to the installation of swa cables.

Regardless of whether the armouring of the cable serves as a protective conductor, or not, it should always be effectively earthed to ensure the requirements of ADS are met. Should the armouring not be effectively earthed and a fault develops due, for example, to mechanical damage of a line conductor incorporated in the cable, the condition may leave the armouring attaining line voltage and pose a danger to persons in the vicinity of the installation or using the installation.

As for any cable, swa cables must be adequately supported so that they do not suffer damage from their own weight (Regulation 522.8.5). In particular, cables connected to enclosures should be properly supported to prevent strain on the gland termination.

In many non-domestic premises, it is common practice for armoured cables to be attached to metallic cable tray. Where this is the case, careful consideration should be given to the manner of attachment. For the purposes of safety, it is recommended that wherever practicable long horizontal runs of armoured cables are supported by the tray as shown in Fig 1 (below) rather than being attached to the open side of the tray (Fig 2 – below). This is advisable to minimise the risk of cable collapse both in the event of fire (Regulation 521.11.201) and any collapse that might occur as a result of the removal of cable ties during additions or alterations. 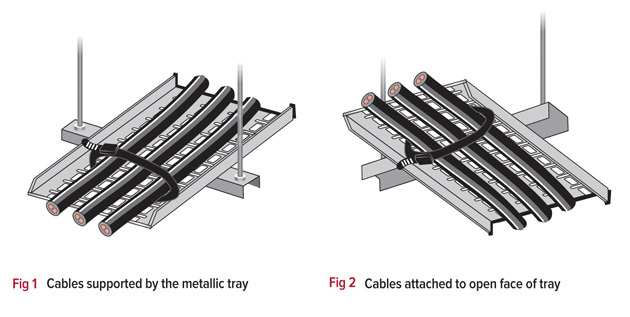 Terminating the armouring at metal enclosures

The connection of swa cable to enclosures should provide electrical continuity and adequate mechanical strength (Regulation 526.1). It should be appreciated that many steel enclosures are provided with finishing products, such as 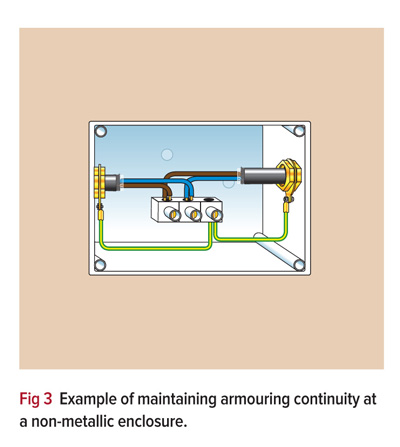 epoxy resin or powder coated paint which may be non-conductive. Manufacturers of such enclosures generally recommend that to avoid detrimental effect to the enclosure, such as rusting, these protective finishes should not be removed. Thus, the finishing product can act as a barrier between the alloys of steel and brass at the interface connection which may affect continuity of the armouring and/or increase the resistance value beyond that acceptable to meet the requirements of ADS.

For these reasons it is important to use the appropriate gland connection and follow the manufacturer’s instructions when terminating the armouring. To ensure good continuity between the armouring and the metallic enclosure the brass earth tag should be bolted to the enclosure.

Using the armouring as a protective conductor

In some circumstances the designer may choose to use the armouring to serve as the protective conductor, as permitted by Regulation 543.2.1. Doing so can result in reduced cable sizes and costs. However, where the armouring is used as a protective conductor it must be confirmed that the swa for the particular cable size is adequate for this purpose. Typically, the csa of the armouring is sufficient to meet the adiabatic requirements of Regulation 543.1.3. Generally, such information is readily available from cable manufacturers’.

Where swa cables are installed between non-metallic enclosures, care needs to be exercised to ensure continuity is maintained. In particular, failure to maintain the continuity across the insulating enclosure would result in leaving sections of the armouring unearthed, and if the armouring is being used as a protective conductor it would leave the circuit without an effective connection to earth. Therefore, as shown in fig 3 (above), a protective conductor link should be installed between the earth tags to maintain the continuity of the armouring.

It should be noted that non-metallic enclosures may be used for purposes where, by design, continuity of the protective earthing of one particular system is intended to be separated from another. For example, an insulating enclosure is commonly used to separate a TT earthing arrangement of an outbuilding from the installations TN-C-S supply system. 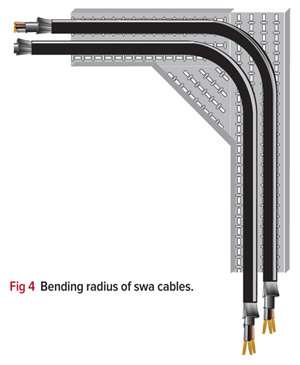 During installation, cables are often dressed or bent to go around the corner of a wall, along a contour of a roof or through holes in walls or timber joists.

Care must be taken not to bend a cable to a radius smaller than the recommended minimum value, based on its overall diameter (Regulation 522.8.3).

For an armoured, thermosetting insulated cable, having copper circular conductors and an overall diameter of 32 mm, it can be seen from Table 1 (above) that the recommended minimum internal bending radius for the cable is six times its overall diameter (therefore; 6 x 32 mm = 192 mm).

Where swa cables are installed in locations prone to dust, wetness or used outdoors the gland connection should provide the appropriate IP rating and the cable should wherever possible be installed to minimise the effects of any external influences.

For example, to prevent the ingress of water, cables used outdoors should be fitted with glands that have the appropriate IP rating, and wherever practicable be installed so that they enter equipment from below rather than above. This will ensure any rain or moisture will run down the cable sheath and away from the equipment.

Where swa cables are routed underground they should be laid at a sufficient depth to prevent damage from any disturbance that is likely to occur. For example, where practicable the cables should be routed to avoid areas where planting is likely. Where this is unavoidable, the depth should be increased appropriately and/or additional mechanical protection provided. 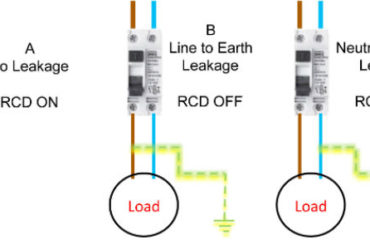 Shedding some light on earth leakage 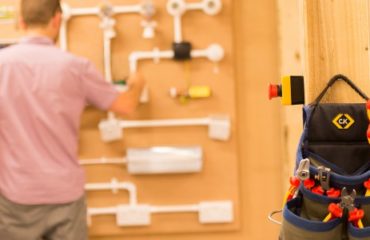 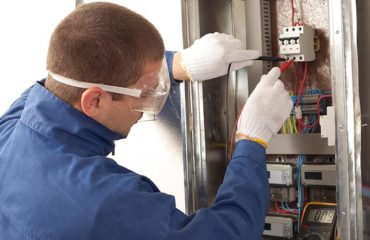 Everything you need to know about the 18th Edition