A chronic shortage of current refrigerants; rocketing prices; rapidly approaching bans … Many of us know by now that the refrigeration industry is facing a tsunami of challenges as pressure grows to switch to lower GWP refrigerants. It is also generally accepted that many in the industry are crying out for guidance – now the waves are just about to break the shoreline – as to on how to tackle the enormous challenges ahead.

In the industrial refrigeration sector, there is even more of a problem. The panel agreed it is is far less easy to communicate with than the supermarket sector for instance, because the industrial sector contains no ‘central influencers’ – people who have an intimate knowledge of refrigeration technology and who can influence the supply chain to act.

As consultant Ray Gluckman pointed out, these influencers are crucial to getting whole sectors to move in the right direction: “The supermarket sector is quite well served because a handful of people at Sainsbury’s, Tesco, etc know what’s going on [in terms of refrigerant legislation changes] and are making informed decisions…

“But, even in a big company in the industrial sector, everything will be done, in refrigeration terms, at site level – it will be the site chief engineer or his assistant who is the key influencer. So, to get the message across about the transition to lower GWP refrigerants, we have to reach out to this rather disparate community… and that disparity is a major barrier to communication.”

For, Grahame Keeping, senior contracts and operations manager of Stonegrove Refrigeration, whatever the criticism of the lack of speed of transition to lower-GWP in the commercial sector, the industrial plant managers are far slower still – he believes they are doing too little to respond to imminent changes to under the F-Gas regulation, particularly when it comes to looking at newer technology like HFOs.

“If I want to develop something, I have to do it off my own bat. If I go to a job and I know that it’s under X amount of kilowatts, I have got a pick of heavy commercial plant. If I know it’s over a certain threshold, I’m looking at traditional ammonia or CO2 refrigerants.”

According to Peter Dinnage, technical director of refrigerant supplier Climalife, the industrial sector, much like the commercial sector, has early adopters and it has laggards: “The supermarkets buy from a lot of industrial food companies. Some of these companies are enlightened and progressive, particularly where they are being driven by their customer like M&S [which has set Plan A benchmarks for its suppliers as well as its own estate], but others aren’t. These are strongly influenced by accountants, they are driven by the cost of the refrigerant and the one thing that got people moving in the industrial sector this year has been the cost of R404A.”

He agreed with the view from Kevin Smith of Dawsonrentals that those looking for low-GWP replacements for R404A are finding that slow approvals from compressor manufacturers are holding them back from making conversions to some refrigerants: “But the other thing holding them back is that they have still got to get approval from their accountants to spend the money. Topping up with R404A, as ludicrously expensive as it is, comes from a different pot than spending money to do a conversion, so they elect to top up.”

“We’ve seen some bigger industrial groups [where the engineering managers have never got together] …They have the same problem in that they all have higher GWP refrigerants, but they’ve each got different types of equipment. So, you can’t say, like you would with the supermarkets) ‘we will convert one bit of R404 kit and use the results as a guide for everyone else’… They’ve got to do is individually; it’s more fragmented.”

Rudy Reginiano, managing director of AFR Refrigeration concurred: “As primarily an equipment supplier, I’m still reliant on people like the compressor manufacturers to approve refrigerants and put them on the selection software because if they’re not on there we can’t select them. I am currently speaking to customers for about an hour and a half each day, trying to answer their questions about the next move. There is clearly still a lot more clarity needed for the sector.

Mr Gluckman recommends a multi-pronged approach to getting the refrigerant transition message across to the industrial end users. He believes climate change agreements – tax discounts on the cost of air conditioning – may offer one possible incentive route.

Climate change agreements were introduced in 1999 as part of the Climate Change Levy (CCL), a tax on fuel. In order to offset the risk for energy intensive industry, these agreements offered an 80 per cent discount off the CCL in return for signing voluntarily an agreement with government that set targets for improving their energy efficiency.

“In the food sector, there are about 10 climate change agreements that are relevant, i.e. in sectors that have got a lot of refrigeration and it would be quite interesting to reach out to one or two of those trade bodies.”

An even better route, he added, would be to use the power and influence of the supermarkets, who are often customers of industrial refrigeration users: “The suppliers jump to attention if the supermarket says they must do something. I think we need to scare the supermarkets into securing their supply chains.”

Mr Dinnage noted the importance of distinguishing between new and existing equipment: “In the industrial sector, a lot of the equipment is designed to last a lot longer and you have equipment out there where people have gone from R22 to R404A and now they are going to have to go to something else.”

Engineers often see it as a badge of honour to keep refrigeration equipment running by replacing some parts and fixing others. Mr Dinnage sees industrial refrigeration as a classic example of Trigger’s broom. [In Only Fools and Horses, Trigger won an award for having owned the same broom for 20 years. He reveals that it has had 17 new heads and 14 new handles, but insists it is still the same broom.]

He said: “They replace every bit of the plant over time, but not all at once… As far as the end user is concerned, he’s got a brand-new plant.”

But the plant’s condition is not the only concern for industrial managers. They must also contend with unparalleled price rises – 1,000 per cent or tenfold since the start of the year for R404A. Mark Hughes, business development manager, EMEA fluorochemicals, Chemours, pointed out: “If you are a customer, the two big issues are price and availability. So, people bring in more than they need, and that empties the shelves and drives the price up.”

Mr Gluckman summarised the current and near-term scenario for refrigerant users: “2017 [has seen] a 7 per cent cut [in the quota for high GWP refrigerants] and we are in this state, whereas 2018 is going to see a 44 per cent cut, which is totally predictable. It is a supply and demand issue in an elastic market. If it looks like supply is going to run out and with a 44 per cent cut, supplies are going to run out next year, the industrial end user will be happy to pay £1,000 a kilogram if it keeps his plant running – the price is very elastic because the consequential damages of not having refrigerant are so great.”

Graeme Fox, head of Refcom stressed that education had to be the way forward: “Knowledge is key [to the transition to lower GWP refrigerants]. I think as an industry we have been sleepwalking into this for a couple of years. It’s really hit us in the face in the last six months particularly, right across the industry, even though we’ve been talking about it for a long time. It is a really confused sector; I think there are an awful lot of confused contractors and end users.”

Consolidating that view, Janet Ludert, fluorochemicals marketing manager for Chemours, said thinks that from the perspective of those closest to the quota situation, prompt and positive action has to be the only logical way forward: She said:“We are looking at how we manage the quota from day-to-day and all the constraints that are coming. It’s very tactical, order by order, customer by customer, but there is a way to get our head above water – and that is to use the A2Ls [mildly flammable HFOs and R32].”

Ms Ludert exhorted the industry to keep encouraging customers – particularly industrial sectors, given the lack of influencers. “We know there are barriers, regulations, and global standards and compressor manufacturers have to make approvals in some cases, but the longer the market waits, the bigger the crunch. For us it is clear the early movers to A2LS are going to have an advantage in the market, so let’s get to it.” 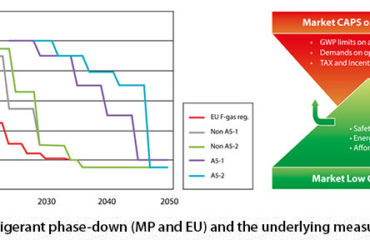