With just two months to go until the new Insurance Act of 2015 comes into force on 12 August 2016, ECIC, the specialist insurer for the construction sector, has identified a worrying lack of awareness of the new Act amongst contractors and tradespeople. In a survey of 200 tradespeople across a range of skills, only 13% knew about the Act. Roofers were most likely to be in the know while heating and ventilation contractors, plumbers and electricians were least aware.

Plumbers and electricians in particular, are being urged to familiarise themselves with the new Act, due to the level of diversification their businesses have undergone in the past few years. 38% of plumbers in the survey said they had diversified into new services, while 31% of electricians said they had branched out into new areas.

Under the new legislation, there is a greater onus on insurers to analyse the risks they are being asked to accept and to pay claims as long as the risks have been fairly described. The obligation for contractors is to pro-actively declare all information known or ought to be known by them, which could influence an insurer’s view of the risk. As such, if they have diversified their business in any way, this must be disclosed to their insurer, not just at renewal, but during the course of their insurance contract if applicable, so that the insurer can properly assess the risk they represent.

Richard Forrest-Smith, chief underwriting officer at ECIC said, “The Insurance Act of 2015 puts contractors in a much better position when they come to make a claim, updating outmoded laws from the 1900s. For example, if a contractor unwittingly fails to disclose relevant information or breaches a warranty, rather than using this as a reason to void the policy and avoid a claim completely, a scale of proportionate ‘remedies’ that the insurer can apply will be in place.

“However, contractors will still need to understand and confirm the type of risks their business deals with. For some, this will be fairly clear-cut, but where contractors have diversified into new markets it is vital this information is disclosed to the insurer.

“We would, therefore, urge contractors to work with their insurance brokers to ensure all relevant information has been disclosed. They should also ensure they keep records of individuals responsible for arranging insurance cover and any senior management involved in the process. It is good to get into this practice as it may support a claim and help get a business back on its feet without unnecessary delay.” 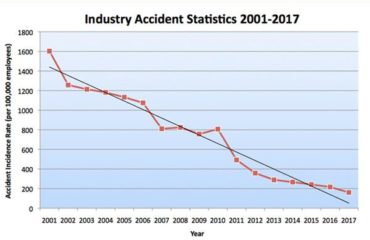 90% decrease in industry accidents since 2001 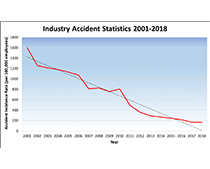