When it comes to the “megatrends” that are affecting the commercial HVAC sector, changes in refrigerants are near the top of the list. That’s the word from Shane Angle, vice president and general manager, commercial air conditioning, Emerson.

Speaking at Emerson’s E360 regulatory breakfast at the 2017 AHR Expo in Las Vegas, Angle pointed out three megatrends affecting the approximately 5.5 million commercial buildings in the United States: building automation and connectivity, energy efficiency and sustainability, and comfort and air quality. The responses to these megatrends include modulation technologies for compressors; efficiency retrofits as, according to Angle, only about 15 percent of the 5.5 million buildings have building automation or management systems that control the HVAC systems; air management systems; and a focus on the refrigerants that will represent the future of HVAC in commercial buildings. 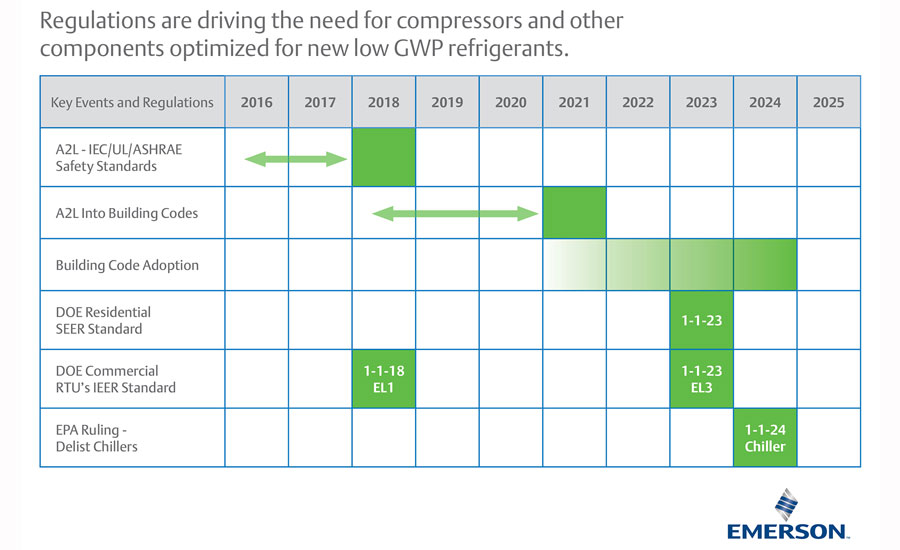 Angle pointed out there is an ongoing pursuit of alternatives to replace R-410A and R-134a, which have been used for years in chillers. However, these popular refrigerants will be delisted in chiller applications effective Jan. 1, 2024, under the U.S. Environmental Protection Agency’s (EPA’s) Significant New Alternatives Policy (SNAP) program.

As of right now, Angle said, the only viable, EPA-approved, low-GWP (global warming potential) candidates to replace R-410A and R-134a in air conditioning applications are the mildly flammable A2L molecules and blends. This presents some challenges, and the industry is working hard to advance and update safety standards, which presumably would lead to updates to the building codes.

“There’s a great deal of attention right now about updating safety standards,” Angle said. “These include international, regional, and UL standards. The goal is to have much of that work completed by the end of 2017, because the building code cycle opens up in 2018.”

“How fast will the states and other entities adopt these new building codes?” Angle asked. “That will impact the timeline by which new equipment using A2L fluids can be commercialized and sold in the market in the U.S.”

Adding to the pressure on equipment manufacturers, the U.S. Department of Energy (DOE) has set the lofty goal of reducing energy consumption in commercial buildings by 45 percent per square foot by 2030.

As fate would have it, this second phase of the DOE’s new energy-efficiency standards for rooftop equipment dovetails with the EPA’s 2024 phaseout timeline for new chillers using R-410A or R-134a.

“Rooftop efficiency standards and low-GWP refrigerants are key dynamics in commercial HVAC,” Angle said. “As manufacturers move to redesign systems to meet the new energy standards, it would be ideal if they could also redesign their systems around these new A2L fluids at the same time. The challenge is completing the safety standard and building code work so that those systems could be sold here in the U.S. and applied in buildings.”

“Chillers are very big machines, and the design cycle is not quick,” Angle said. “So, even though the delisting of R-410A and R-134a isn’t until Jan. 1, 2024, if we look at the timeline (see Figure 1) and work backwards, you’ll see we have to get started now in terms of optimizing components around A2L refrigerants. Then, the chiller manufacturers can design the components into their chillers.”

“In Europe, a handful of chillers have been released that are utilizing mildly flammable fluids, such as the hydrofluoroolefin [HFO] refrigerant 1234ze,” Angle said. “Those systems essentially have been designed to existing A2 standards or A2 codes. It depends on the region, but there are some systems on the market today that utilize flammable or mildly flammable refrigerants.

“In the U.S., the EPA has approved the use of R-32 for low-charge units, such as window units and packaged terminal air conditioners,” he added. “With these very low-charge units, it’s a little bit simpler to ensure the units are safe as opposed to the larger units, where it takes a great deal of work to figure out exactly what safety provisions need to be made.”

So, the bottom line in the commercial HVAC market is there’s much change on the horizon, a lot of work in progress, and much yet to be done. And, not surprisingly, refrigerants find themselves prominently circulating throughout it all.

R32 – the importance of training