Testing, inspection and certification market is expected to reach £87 billion by 2022 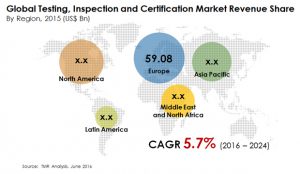 The testing, inspection, & certification (TIC) market was valued at USD 79.55 Billion in 2015 and is expected to reach USD 113.24 Billion by 2022, at a CAGR of 5.15% between 2016 and 2022. The growth of the testing, inspection and certification market is driven by factors such as the increasing number of new regulations & standards in some certain end-user industries, rising trend of outsourcing TIC services to third-party service providers, formulation of stringent regulations & standards to ensure the quality & safety of products, increasing product diversification, and global trading of products & growth of distributed manufacturing.

During this research study, major players of the TIC ecosystem in various regions have been identified and their offerings, regional presence, and distribution channels have been understood through in-depth discussions. To find the overall market size, the top-down and bottom-up approaches have been used to estimate the sizes of other individual markets by using percentage splits from secondary sources such as Hoovers, Bloomberg Business, Factiva, and OneSource as well as primary research.

The entire procedure includes the study of the annual and financial reports of the top market players and extensive interviews of industry leaders such as CEOs, VPs, directors, and marketing executives for key insights (both qualitative and quantitative) pertaining to the market.

The market for outsourced TIC activity is estimated to grow at the highest rate between 2016 and 2022because many large firms are increasingly outsourcing these services to reduce costs as the increased regulations make it more costly to conduct these tests in-house. The overall outsourced TIC market is highly fragmented, with a large number of leading players owning approximately 35% to 40% of the addressable market.

The prominent companies in the market include the well-established, financially stable players that have been operating in the industry for several years and have diversified service portfolios, proprietary technologies, and strong distribution networks and offices worldwide.