What are the recommendations for emergency lighting in non-domestic premises?

As a result of a number of legislative requirements such as those relating to health & safety, fire and building regulations some form of emergency lighting will normally be required in most, if not all, non-domestic premises.

The defined emergency escape routes within buildings should be provided with at least the minimum levels of illumination recommended by clause 5.2.5 of BS 5266-1. For escape routes up to 2 m in width, the horizontal illuminance along the centre line (at floor level) should be at least 1 lx. In addition, clause 4.2.1 of BS EN 1838 requires that the central band of the escape route (consisting of not less than half the width of the route) should be illuminated to at least 50 % of that value. Wider routes should be treated as a number of 2 m wide strips, or open area (anti-panic) lighting should be provided.

It should be recognised that in earlier editions of BS 5266-1, a reduced level of illumination of 0.2 lx was permitted in escape routes, provided they were kept unobstructed at all times. However, in practice, ensuring corridors and stairways (that formed part of an escape route) were clear and hazard free at all times proved difficult to manage, mainly because items such as photocopiers, display cabinets, and seating were often located in such locations. As a result, where such locations are found to have a reduced level of emergency lighting it must be confirmed that this provision remains suitable for the application.

Some occupants, such as the elderly or those with impaired vision, will take longer to perceive objects and adapt to changes of illuminance. Therefore, the illuminance provided along the escape route(s) may need to be higher than the minimum value specified. (BRE Information Paper 9/97 [28] identifies conditions that benefit from a minimum illuminance of 3 lx on the centre line of the escape route, clause 5.2 refers).

The objective of open area (anti-panic) lighting is to provide a sufficient level of illumination so that occupants can feel safe and move towards a place of safety when the supply to the normal lighting fails. Excluding a 0.5 m strip around the perimeter of the area, clause 5.2.6 recommends that a minimum illuminance of 0.5 lx is provided at the floor surface in the following open areas:

The following example illustrates the recommendations of BS 5266-1 for the provision of emergency lighting in open areas and rooms. 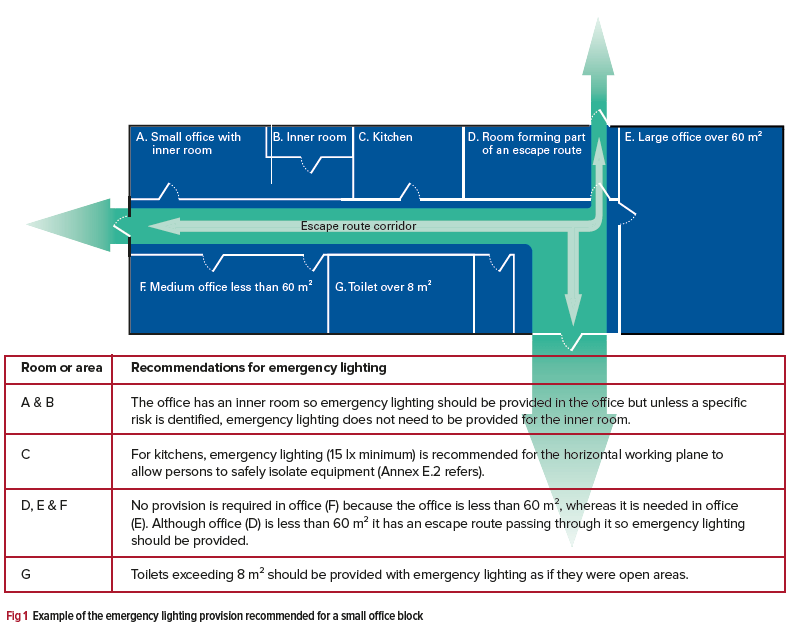 Typical factors for consideration in a risk assessment include underground or windowless areas, high levels of occupancy, whether an escape route passes through the area or if there is a need to switch off equipment before leaving.

For the designated escape routes shown, luminaires will need to be provided at all points of emphasis in accordance with clause 5.2.8, such as, for example, at changes of direction, exits and outside the building to a place of safety. 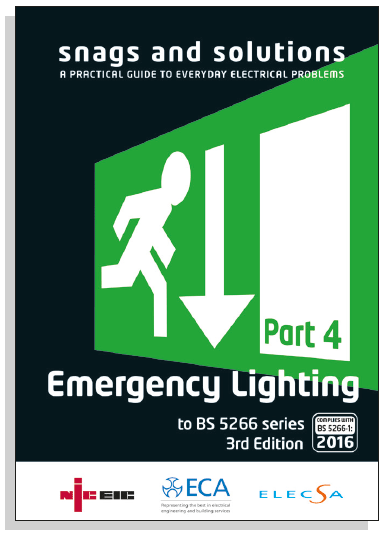 Greater levels of emergency illumination may be required in areas of particular risk to allow for the safe shut-down of potentially dangerous processes or activities. Clause 5.2.7 recommends that an emergency illumination of not less than 10% of the normal lighting (average value) is provided at the relevant point of the location of the risk. However, depending on the activity higher values may be needed. Requirements for high-risk task area lighting are specified in BS EN 1838.

In premises where the occupants are not intended to be evacuated immediately, ‘emergency safety lighting‘ should be provided in accordance with clause 5.3.

The NICEIC and ELECSA snags and solutions publication; Emergency Lighting Part 4 provides guidance on the design, installation and inspection and testing of emergency lighting systems. 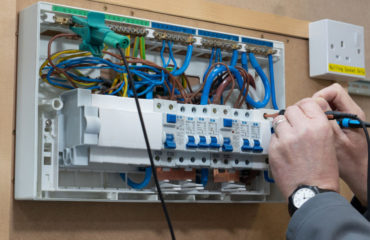 Why do an Inspection and Testing course?